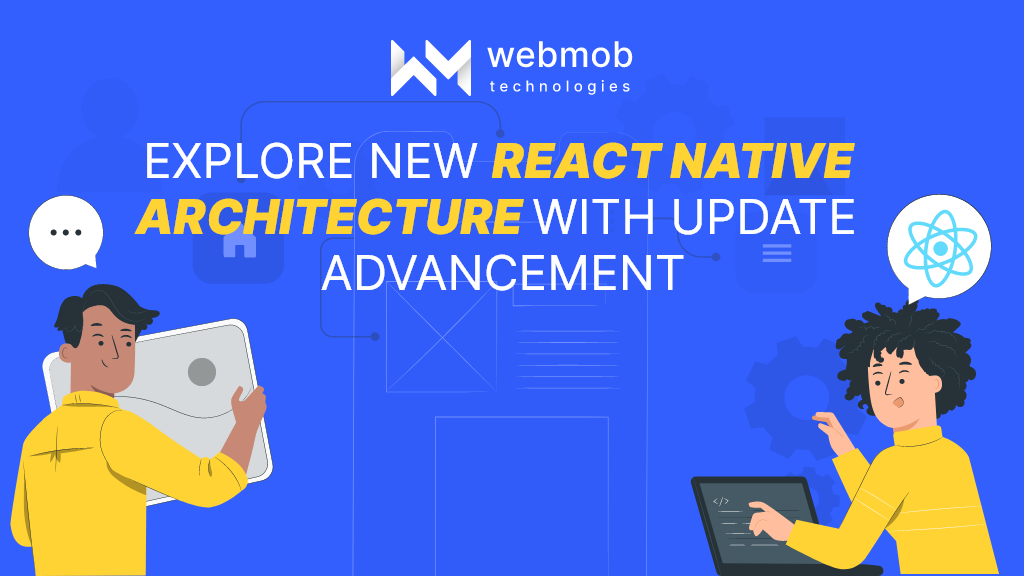 Introduction: The digital world has come up with a lot of opportunities and innovations. Every day there is a new tech advancement to make software look more appealing and approachable for online engagement. Many frameworks and libraries have made a special place in the developer community worldwide. One such open-source framework that has made its place is React Native and its undeniable updates around the year. It has been a phenomenal UI development framework. Recently, the advancement has come up with some of the best architectural trends to create a successful and fast application. Let’s dive into the blog and look at the exceptions made by the React Native team of experts.

One needs to know its actual outcome when a framework gets new advancements. React Native has brought new advancements in architecture, which developers will highly appreciate around the globe. So, without doing further due, let’s get into it.

Why Will You Need React Native New Architecture?

With the advent of React Native, today, hybrid apps are high-performing, feature-rich, and secure. Nearly 38% of developers use this framework for its easy tech developments. To make it even more accessible, the development community decided to level up its architectural needs.

This information is likely to help you if you plan to develop more excelling applications in the digital world & if you are planning to hire a react native developer. So keep the new trend in mind for significant online development.

The React Native team launched a New Architecture, giving developers new tools for creating incredibly fast and responsive apps. The most significant changes made by the new design are covered in this article.

Here, the following topics are covered:

Let’s examine the existing architecture and its operation before learning more about the new one. We know React Native’s single-threaded nature and its three primary threads.

The three threads mostly communicate over the bridge using asynchronous JSON threads rather than direct communication.

JSI significantly alters the interaction between native components and javascript.

React Native makes communication between the JS and Native threads possible by using the Bridge Module. Data must always be serialized as JSON before being sent across the bridge. It is also necessary to decode the data when it is received from the opposite side.

With JavaScript and Native Realm Data Sharing, we won’t even need to copy data between two worlds when using JSI to call native functions directly without having to send enormous quantities of data. It will assist a user in resolving the JSON processing time issue.

The fact that the interface is created in C++ adds to its charm. With the strength of C++, React Native can target many different systems, including Smart TVs and watches.

The dedicated team of React Native developers has managed to introduce a new render Fabric. It is conceptually an improved version of the previous rendering system.

It was developed by Facebook(now Meta Platforms, Inc.) and is a redesign of the UI manager.

By creating a shadow tree directly in C++ with the aid of Fabric, the rendering technique is made more efficient and streamlined, which enhances host platform compatibility.

User interactions like scrolling, gestures, etc., can be prioritized to be processed synchronously in the main thread or native thread thanks to the new rendering system. While some actions, like API queries, will be carried out asynchronously.

In other words, it is a render optimization for screens that significantly boosts performance.

When Fabric is made available, the general rendering order will be as follows:-

In comparison to these old native modules, Turbo Modules are essentially an improvement.

The native JavaScript modules currently used in the architecture, such as Bluetooth and file storage, must be initialized before the app can run. Therefore, even though we do not require all these turbo components, there is an additional loading time.

With the help of Turbo Modules, JavaScript may make references to these modules, enabling JS code to load each module as needed. The start time for React Native Apps will be faster as a result.

CodeGen defines interface elements by using Turbo Modules and Fabric in JavaScript. It results in more code generation in build time instead of run time.

This is how the new architecture will seem once all the updates are combined.

Thus, React Native is significantly here to make a change. You can move forward with it on the new technological journey. The architecture looks promising and capable of standing the new grounds of the digital arena. So, be the first to get your hands on such software development and ace your performance online.

On a concluding note

This new advancement assures the developers of significant migration and other services in the coming years. The React Native family has a lot to offer in the digital space. If you are planning for a power-packed, impressive framework, then there is no other stable tech advancement like React Native. So go ahead and make an exception to the space by developing a successful cross-platform or hybrid app development using the framework.

If you still have second thoughts, you should consult a React Native app development company. Ensure that you approach an experienced firm and interview a developer before approaching them for your project. Invade the digital space with many such upcoming advancements.